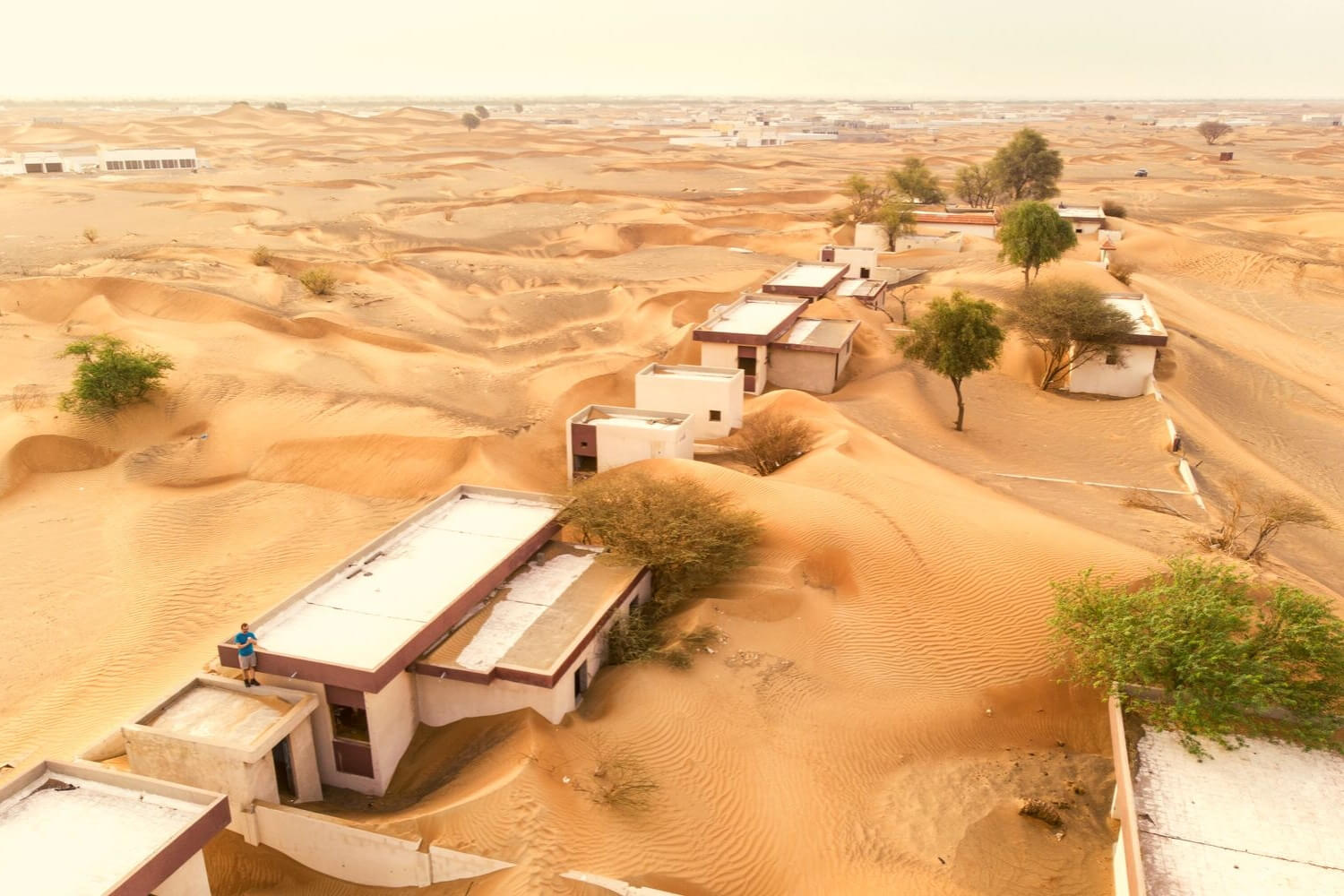 In a city known for being full of extremes and “world records”, it should come as no surprise that Dubai is full of quirky and amazing architectural wonders.

Let’s take a look through Dubai’s incredible – and often unbelievable – landmarks & attractions sure to wow you on your next visit to Dubai.

Yes, its a giant picture frame.  Perfectly positioned between old and modern Dubai, the 150m high towering gold structure serves as both an iconic storytelling monument and an observation deck. You can ascend the sides of the frame to visit the see-through platform standing 48 stories above Zabeel Park.

Learn more about exploring inside the Dubai Frame and ticket options here.

I mean where else would they try and build the entire world? Dubai, of course! A collection of 300 man-made islands situated 4 kilometres off the coast, each of the islands within this artificial archipelago is set for sale and development. To date, Lebanon is the only island to have opened with the project having hit many financial and structural setbacks since work began in 2003. Watch this space though as future islands are unveiled… we believe large portions of Europe are due to open soon.

Whilst most might be familiar with Palm Jumeirah, with the Atlantis Hotel as it’s crowning jewel, you may not be aware there are in fact three “Palm Islands” in Dubai, stretching into the Arabian Gulf. Palm Jumeirah is currently the only open and inhabited project, packed full of luxury resorts, residences and entertainment complexes.

Neighbouring Palm Jebel Ali to the west of Palm Jumeirah, is a much larger project which remains under construction – earthworks are completed there is no set date for development to begin. Palm Deira to the east has been rebranded now as Deira Islands, losing the original palm-shaped plan but now proposed to house, amongst many things, the biggest night market in the world.

It’s another watch this space though. Are engineering dreams bigger than the environmental realities of such mega-structures at sea?

Museum of the Future

Still in the final stages of completion, the Museum of the Future has already been wowing standers-by with its incredible curved structure on the side of Sheikh Zayed Road. The elliptical shaped building, inscribed with calligraphy will become an “incubator for innovation”. With an expected opening date in late 2020, the curvaceous structure has already become one of the city’s most eye-catching buildings, we can’t wait to see inside!

OK, maybe not quirky – but we can’t have a list of famous Dubai landmarks and leave off the world’s tallest tower. An incredible 160 floors dramatically rising 828m into the air, there’s no missing the incredible architectural wonder of the Burj Khalifa. It has the highest observation deck in the world, the highest mosque in the world and the highest indoor swimming pool in the world, amongst many other records.

You can learn more on the different ways to experience Burj Khalifa here.

While we’re on the topic of towers, Cayan Tower (formerly Infinity Tower Dubai during construction) is the world’s tallest high-rise building with a twist of 90˚. The incredible spiralling skyscraper stands at 305 meters tall – 80 floors of residential space without a structural pillar. It’s almost lost amongst the skyscraper of Dubai Marina these days but is one of the most iconic buildings in the city skyline worth keeping an eye out for as you cruise JBR and the Dubai Marina.

In a city packed full of skyscrapers, there’s just one more that needs an extra special mention. The Gevora (far left below) stands out not only because of its entirely gold exterior and glowing roof – the brightest in the Downtown Dubai skyline – but because it’s 75 floors recently made it the tallest hotel in the world, surpassing the JW Marriott Marquis.

Check out here what a night at the Gevora will set you back (it’s not as much as you might think!)

The Queen Elizabeth 2 cruise ship, decommissioned in 2008 was bought by a Dubai Government entity and is now serving as a floating hotel docked at Rashid Port, Dubai. The hotel has reopened (although restoration works are ongoing and since Covid-19 further restoration works resumed). You can not only tour the historic cruise liner but dine aboard, see live shows and sleep overnight – firmly placing itself as one of Dubai’s most unique landmarks.

Find out what a night on board the QE2 will cost

Not nearly as impressively tall as some of Dubai’s superstructure from the outside, however, it’s what’s inside that counts, right? This incredible giant origami-cube looking building adjacent to City Walk is home to a thriving Equitorial Rainforest inside. The largest artificial tree in the world houses over 3000 species of plants and animals, giving a brilliant educational eco-adventures for families in the heart of the city.

Learn more about the incredible tropical biodome The Green Planet

In an Instagram perfect city such as Dubai, of course, it’s easy to believe such a place exists! This man-made extension to Al Qudra Lakes is carved within the Al Marmoom Desert Conservation Reserve, part of Dubai’s Saih Al Salam desert. The Love Lake park includes plenty of insta-perfect photo stops on the ground and from the air (noting Dubai’s strict drone laws), encouraging visitors to get out and experience some of the unique desertscapes Dubai has to offer.

Sticking with the desert, once a small village belonging to the Al Kutbi tribe, Madam is now a tourist attraction in itself for its abandoned buildings trapped beneath the desert sand drifts. Haunted or simply overcome by the powerful forces of Mother Nature? Accessible only by 4WD (or a long walk from present-day Al Madam), curious local residents and visitors alike come to seek out a slice of the eery action in Al Madam, located in Sharjah Emirate, near to the Oman border.

This sail-shaped hotel is as iconic as Dubai itself. One of the earliest modern landmarks of Dubai, announcing that exotic luxury had arrived in the city it exploits it’s “7 Star” superlative beautifully. With over 200 luxury suites, multiple infinity pools, restaurants and a helipad, no less. It is not the tallest building in Dubai by any means at a mere 321m but certainly the most iconic and worthy of its title as one of the most photographed buildings in the world.

There are plenty of ways to get access inside Burj Al Arab without needing to pay for a night in a suite – see all our Burj Al Arab tips & tricks!

In the depths of the Dubai Mall, you will find the most incredible view – the largest suspended aquarium tank in the world. Sure, there are plenty of big aquariums in the world; but this one earns it’s stripes for the unique viewing wall 51m x 11m which is free to see for shoppers in the Dubai Mall to observe the 10 million litre tank. There’s plenty more inside from the aquarium tunnel to the underwater zoo and hands-on experiences.

If you want to experience further inside the aquarium check out ticket options here.

Set to open during 2021, Ain Dubai will become the world’s largest observation wheel, at a staggering 820ft (250m) high. Set on the new man-made peninsula called Bluewaters Island, it is attached to the end of JBR by bridge, offering spectacular views back over the high rises that line Dubai’s beachfront and the Palm Jumeirah.

Do you have any other famous landmarks you love or quirky favourites in Dubai? Let us know in the comments below!

A 4-day Dubai Itinerary to Capture All The Highlights

10 Unmissable Dubai Nightclubs to Experience in 2022