Latest news
Best place to stay in Dubai – 2021 guide to Dubai accommodation for all budgets
Ultimate guide to plan your visit to Burj Khalifa in 2021
150+ amazing places to visit in Dubai in 2020
How to cross the Dubai to Abu Dhabi border during coronavirus restrictions UPDATED
Exciting Ways to Bring in the New Year 2021 in Dubai
Dubai Public Holidays 2021
Why we love Dubai in January – and we bet you will too!
Animals of Dubai: UAE Native species & where to have animal encounters in Dubai
Picking out the best Dubai Morning Desert Safari providers
Here’s how to experience the Burj Lake and Dubai Fountain Boardwalk
Spectacular things to do in Dubai Mall with Children
Fancy a free hotel night courtesy of Emirates this winter?
Dubai National Day 49 – Your 2020 Events Guide 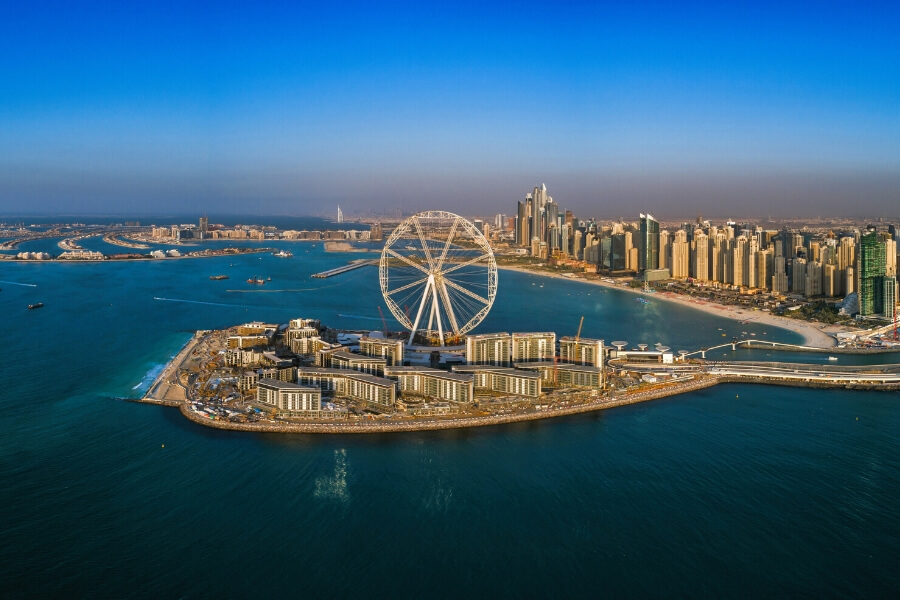 What to expect at Bluewaters Island Dubai

We’ve watched construction unfold across the water from JBR for the best part of 5 years and it’s now finally – for the most part – it’s open to the public!

Let’s take a look through what you can expect from this spectacular new entertainment area of Dubai.

Bluewaters is a purpose-built lifestyle destination. Situated on a man-made island off the shores of JBR but connected by both pedestrian and vehicle bridges, it is the new home to residential buildings, retail therapy, hospitality and entertainment.

It is set to become one of Dubai’s hottest new addresses for luxury and entertainment and it’s ready to woe visitors like you!

How do you get to Bluewaters?

Although it’s technically an island, it’s very easy to get to Bluewaters from the surrounding beachfront areas:

You can get to Bluewaters easily on foot from Jumeriah Beach Residence (JBR) – The Beach over a pedestrian footbridge known as The Wharf Link that connects the two beachside entertainment zones of the city.

The closest Metro stations are:

There are over 2000 parking bays on-site making it easy to self-drive, or alternatively catch a taxi or ride-sharing service to the door. You need Exit 31 from Sheikh Zayed Road.

What is Ain Dubai?

Set to become the tallest observation wheel in the world when it opens, Ain Dubai will soar to heights of 250m – taking it over 80m taller than the current record holder, the High Roller in Las Vegas – and nearly double the height of the London Eye.

Some mistakenly refer to it as the Dubai Eye as this was one of the very early project names (as well as Dubai-I) but Ain Dubai is the correct name for “that giant wheel thing over there”.

From the top of the wheel, visitors will be rewarded with spectacular views over Palm Jumeirah and the Burj al Arab, even Burj Khalifa in the distance on a clear day. Rides in your ‘smart capsule’ will last for 48 minutes.

More than just an observation wheel at Ain Dubai, one of the wheel legs will be housing the highest rope climbing platform in the world. Stay tuned for more exciting opening announcements!

READ MORE
Is Dubai pass worth it? The best way to see Dubai's top tourist attractions

Not yet.  As at the time of writing we expect Ain Dubai to open in late 2020 (Updated: we suspect due to the impact of Covid-19 this may be further delayed as it was due to open alongside Expo 2020 which has moved to 2021).

It certainly caused quite a stir when they announced that Vegas branded hotel Caesars would be opening in Dubai.  But we’ll be clear it does not now, nor will it in the future (as far as we’ve all been lead to believe) have a casino – local laws have not suddenly changed! The similarities, however, to it’s Vegas counterpart is that it will be a hub of live entertainment.

There are, in fact, two Caesars hotels sitting side by side. Both are 5-star offerings. There is also a residence’s building which can be rented by Dubai holidaymakers looking for a little extra space.

As well as 12 dining options and the Qua Spa, stretched between the resorts is Cove Beach, a pool and beach club open to both hotel residents and visitors on day passes.

Other attractions at Bluewaters

Beyond the stunning Caesars hotel complex and unmissable observation wheel, Bluewaters will be home to 132 retail outlets and restaurants in a lifestyle area known as The Wharf.

It’s still early days for this new hot spot in town so give it time for the area to mature and all retail spaces to open, but we’re pretty sure it’s going to become a tourist favourite alongside JBR & The Beach and top of our Dubai family visitor bucket list!.

You can learn more at www.bluewatersdubai.ae

Take me back to the latest Dubai travel news

Where is Dubai? Facts about Dubai and the UAE

How to get from Dubai Airport to Dubai Mall

How to cross the Dubai to Abu Dhabi...

Exciting Ways to Bring in the New Year...

Why we love Dubai in January – and...

Save on top Dubai attractions