When to Visit Dubai 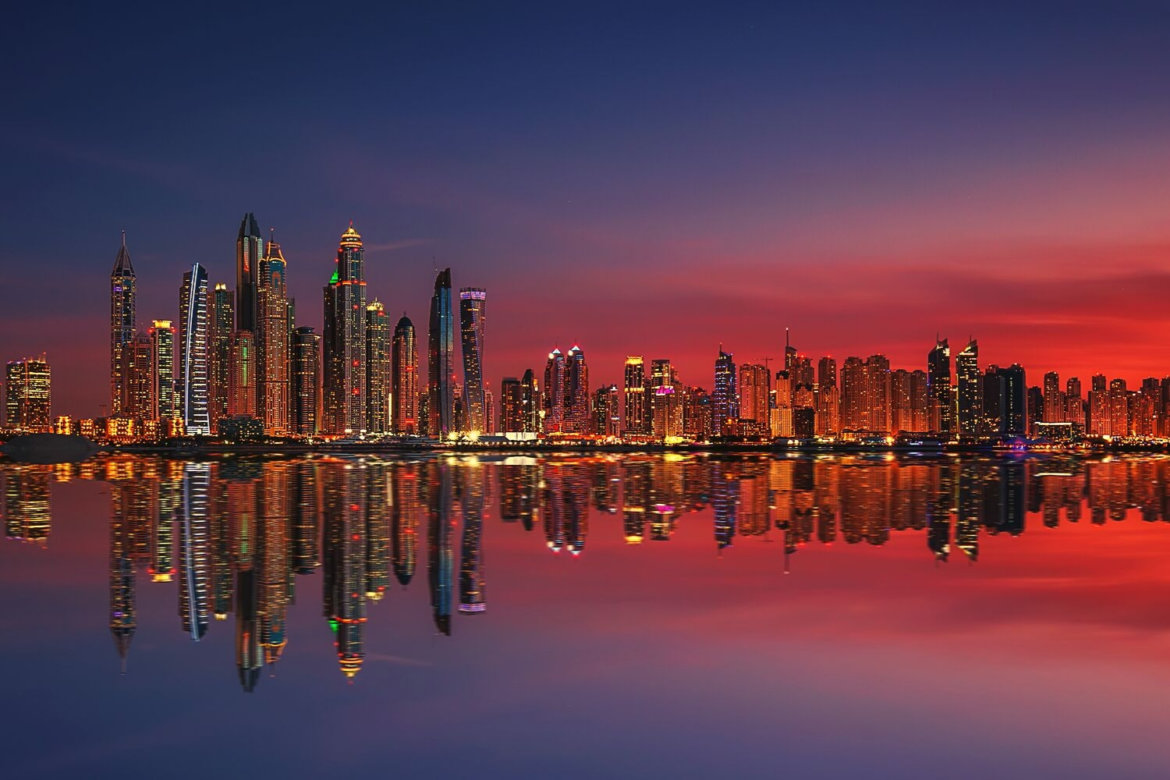 A city with year-round action, but is there an ideal time to visit Dubai?  We look at the seasons and special events you may want to plan your travel around.

Life in Dubai largely moves indoors and to the evenings during the hottest months.  Peak summer temperatures can be as high as 50c (122F), though average in the low 40’s.

It really starts to heat up by late April and peaks in August/September when the humidity also kicks in.

Be mindful not only of air temperatures but sea temperatures which can rise to 32-35c mid-summer – not exactly a refreshing ocean dip!  You’ll want to check that your accommodation has a temperature-controlled pool.

By October the temperatures start to receed and humidity drops, then by November you are back to the mild and pleasant winter.

Dubai in the winter is a magical place to be. Seasonal outdoor events return and there are plenty of hours of sunshine to enjoy.

Midwinter festivities stretch from the excitement of GP weekend in neighbouring Abu Dhabi in November and National Day in early December, accompanied by Rugby 7’s and Christmas (yes, even in a Muslim country it’s still full of festivity), through to the Dubai Food Festival in March. By April, seasonal events start to close down and life moves indoors.

Winter is the best time of year to enjoy the desert and outdoor adventures.

Is there a best season to visit Dubai?

Dubai doesn’t really work on traditional seasons of the northern hemisphere, moving from mild to hot to very hot to extremely hot!  You are better assessing Dubai on a spectrum of how much heat you can manage!

You can also learn more about special events and occasions to be aware of when planning your trip to Dubai here:

What weather should I expect in Dubai?

You can learn more about the exact weather to expect each month in Dubai here:

Does Dubai get rain?

Yes! It might take you by surprise, but rain is possible over the cooler winter months (or it could stay completely dry!) Over the last 10 years it has rained on average 5 days of the year.

No need to pack an umbrella just in case.  If it does rain, it’s best just to stay put if you can until it passes. Its unlikely to go on for hours and during peak rains the roads can flash flood and driving becomes chaotic.

Does Dubai get sandstorms?

Yes! Dust or sand storms are a common occurrence in the UAE.  Maybe not the extreme that you see in the movies (looking at you Mission Impossible!) But none the less there can be a lot of dust in the air. In fact, Dubai often has a permanent hanging layer of dust spoiling the skyline.  You experience this less so in Abu Dhabi and the other Emirates.

The problem in most of the UAE is the fine layer of dust that develops pretty much year-round. A hazard of being in the middle of the desert, you will discover pretty quickly why most people don’t hang their washing outside!

Those with severe asthma and other respiratory conditions should keep abreast of the AQI if it’s dusty out.

Does Dubai get fog?

Yes! The most common atmospheric condition you will encounter, after sut, is fog.  This can cause havoc, particularly in the winter months with the major airports. There’s no way of predicting it in advance but one of those things you might need to factor into your travel plans if it occurs during your visit. Normally it burns off by late morning but it can make overnight and early morning driving hazardous (more so than usual!) and delay planes.

Does Dubai get snow?

We would joke that the only time Dubai has seen snow is when Ski Dubai arrived! It has, in fac,t snowed in the Northern  Emirate of Ras Al Khaimah! The last time this was recorded on the country’s tallest peak Jebel Jais was in February 2017.  Jebel Jais in the Hajar Mountains can experience temperatures up to 10c cooler than the coast.

As a Muslim country, as well as following the Gregorian calendar, the Hijri Calendar is observed.

Please note: the weekend is Friday/Saturday making these days much busier than during the week Sunday through Thursday.

The main Religious observances are:

These dates move forward roughly 10 days each year compared to the Gregorian calendar.  Actual dates are not confirmed until the moon is sighted, and the Government may move the actual dates that the public holiday is observed.

It’s important to observe each year when the Holy Month of Ramadan – the 9th month on the Hijri calendar will occur (the start date changes by approximately 10 days on the Gregorian calendar each year).  This is a period of deep religious reflection for Muslims and is strictly observed.

The most important thing to observe is fasting with no eating in public allowed, but also no public displays of affection and ensure the modest dress code is strictly followed. It can be a little confusing for visitors to know exactly what to expect. We wouldn’t entirely advise against visiting at this time but you will have quite a different experience, joining in with iftar (the evening breaking of the fast) and overnight festivities.

The other thing you may observe is that many businesses and attractions are closed during the day and only open in the evening. If you are only in Dubai for a short stopover you need to be conscious of this or you may find yourself stranded in the heat with little to do!

You can read our complete guide to visiting during Ramadan here.

Visitors should be mindful when local school holidays occur in Dubai.  Most Dubai schools work on a three-term school year from September to December, January to March and April to June.

Some schools also have mid-term breaks in late October, mid-February and late May.

You can see the Dubai school holidays announced by the Ministerial Development Council here.

If you visit at any of the peak school holiday times, expect hotel accommodation to cost more and attractions to be MUCH busier. At these time you will want to book in advance and arrange skip the line tickets if possible.

Seeing attractions earlier in the day you will always encounter fewer crowds than the evening, it is very much a stay up late and evening culture in Dubai, even for families.