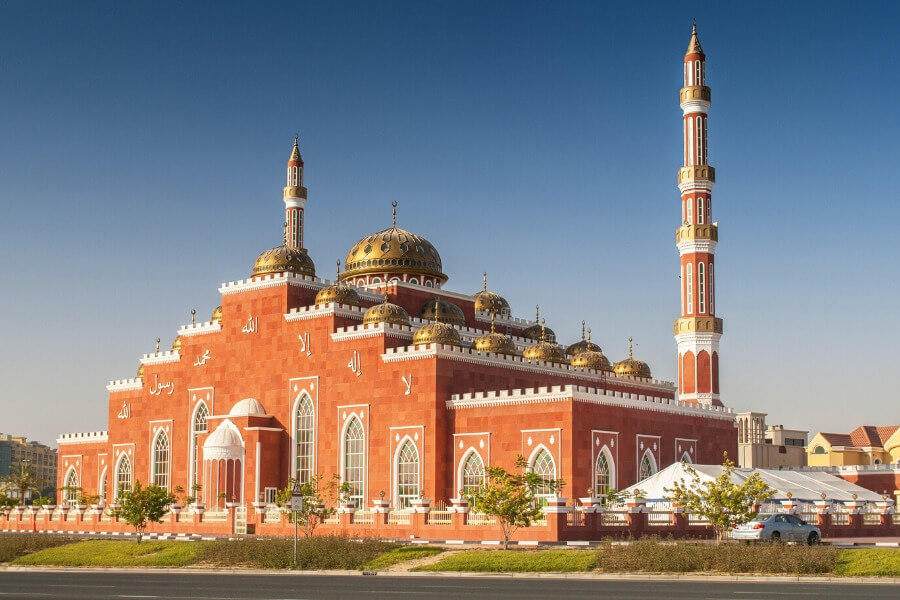 Can I visit a Dubai mosque as a non-Muslim?

The most beautiful mosques in Dubai

It’s no surprise how fascinating mosques are to non-Muslims, the sheer elegance and beauty of the buildings, architecturally stunning and the lessons on Islamic culture they hold within.

Whilst the call to prayer may prick the attention of many a visitor to Dubai, I bet you have been curious, can I actually go inside a mosque?

Unlike many other religious buildings around the world, as a non-Muslim, you should not simply walk up to a mosque in Dubai and expect to be allowed in.  Mosques – also known as Masjid in Arabic – in Dubai are first and foremost a house of worship, not a tourist attraction.

That said, there ARE a few mosques in Dubai and two others in the UAE that allow non-Muslims to visit, not only admiring their beauty from the outside but providing tours and education programs within.

The most famous that visitors to Dubai are likely to be aware of is the Grand Mosque.  By this, we mean the Sheikh Zayed Grand Mosque which is actually located in neighbouring city Abu Dhabi, a bit over an hour away from Dubai.

Whilst it is possible to visit Abu Dhabi and the Grand Mosque on a day trip, those tight on time may be looking at options readily available with the city of Dubai.  (We will cover how to see the Sheikh Zayed Grand Mosque later in this post!)

So which beautiful Dubai Mosques will permit you to enter as a non-Muslim?

The most well-known mosque in Dubai has been welcoming non-Muslim visitors for educational purposes for many years. Their motto is “Open doors, open minds”.

Guided tours are arranged daily (except Fridays) by The Sheikh Mohammed Centre for Cultural Understanding. They last for 75 minutes and include refreshments.

Did you know… the Jumeirah Mosque adorns the back of the 500 Dirham note!

Built in the late 1980s and renovated in 2003 and 2011, Al Farooq Omar Bin Al Khattab Mosque in Dubai is another mosque in the UAE to welcome non-Muslims. The building complex includes not only a mosque but an Islamic Centre equipped with an extensive library on Islamic teachings. You can learn here about Muslim culture, medicine, art and science as well as Quran lessons.

From the exterior, you will see four distinctive minarets of 65-meters. Its great dome measures a staggering 30 metres high and huge stained glass windows flood the interior with light.

Whilst named after Umar Bin Khattab, the building is said to be inspired by Istanbul’s Blue Mosque with its Andalusian and Ottoman style. But don’t be mistaken, it is not one of Dubai’s “Blue Mosques” more on them below!

Tours at this mosque are conducted by the resident cultural guides of Al Farooq Omar Bin Al Khattab Mosque & Centre. The focus of the tours is on the history and architecture of the mosque, along with the painting and engravings and lasts for one hour.

Also known as the Grand Mosque (not to be confused with the one in Abu Dhabi), this Grand Mosque can be found in the Bur Dubai area, opposite the Dubai Museum.  Situated in the oldest neighbourhood, it is one of the largest mosques in Dubai, as well as the highest in Dubai with 70m tall minarets.

Whilst you cannot enter the Grand Mosque Bur Dubai as a non-Muslim, you can marvel at the architecture from outside. The Minaret is of Anatolian architecture and the tallest in the city, non-Muslims have permission to climb it for stunning views over old Dubai.

Looking for other ways to learn about the Quran and Islamic culture? Try a visit to the Quranic Park

Other interesting mosques in Dubai

Although not open to the non-Muslim public, amongst the 1400+ mosques in Dubai there are many other notable mosques in that capture the eye of visitors that you may be interested in viewing from outside, these include:

Located on Al Wasl Road in Jumeirah, this is the most famous Shia mosque in Dubai, also known as the Persian Mosque. The mosque was founded by the Iranian community in Dubai in 1979, with the aid of the Iranian Red Crescent. The architecture is inspired by quasi-Fatimid with Persian influences.

Non-Muslim visitors are reportedly allowed into the mosque on guided tours. Private Muslim tour guides can also take visitors outside of prayer times, however, we do not have an exact schedule as of early 2022.

Update: From a Private UAE Facebook Group we gather you can contact Kosar on WhatsApp +989190247164 to arrange a tour.

Located in the Bur Dubai district, near to the textile souk this is the second “Iranian Mosque” in Dubai, built with the distinctive Persian-style architecture; distinctive blues, greens, yellows and reds in beautiful floral patterns and tiled calligraphy of Quranic quotes.

Non-Muslim visitors cannot come inside this Shia mosque, however, external photography of the facade is permitted. You can spot it apart from the other Persian Mosque in Jumeirah as it lacks the two distinctive minarets and large wooden doors.

Located in the Al Barsha area, near to Mall of the Emirates, this mosque catches the eye for its stunning red exterior, with white accent features and gold domes and balconies on its minarets. The architecture has been influenced by both Ottoman and Emirati culture and design features. Opened in 2014, the mosque can accommodate 1500 worshippers. Not open to the public.

Said to be Dubai’s first eco-friendly mosque, located in Deira the mosque can house 3,500 worshippers. The architecture is based on traditional Emirati Bedouin styling for cooling. It may look more “simple” than other mosques in Dubai but is notable for its size and energy efficiency in the bustling older corner of the city. Not open to the public.

Masjid Al Rahim is one of the newest and most beautiful mosques in Dubai to capture the eye and curiosity of visitors. Opened in 2013, it is the only Mosque in Dubai Marina. It is particularly notable at night when its golden domes and blue minarets light up the city skyline. Not open to the public.

Another among the most beautiful in Dubai, Zabeel Mosque in Zabeel Park opened in 2012 with a capacity for 4,000 worshipers. Not open to the public.

Other UAE Mosques of interest

The entire of UAE is said to have over 5,000 mosques. The vast majority do not accept visitors, however here are some notable exceptions or places of history, importance and beauty you may like to include on a trip around the United Arab Emirates:

As we mentioned at the outset, although not in Dubai, certainly one of the UAE’s most famous buildings is the Sheikh Zayed Grand Mosque.  The utterly stunning white marble structure with an impressive 82 domes sits proudly at the entrance to Abu Dhabi island.

Covering an impressive 22,400 square metres including internal courtyards, with the ability to house over 41,000 worshippers at once (10,000 inside and 31,000 outside), it is the third-largest mosque in the world.

Apart from a mosque, it is also the resting place of the country’s Founding Father Sheikh Zayed bin Sultan Al Nahyan; two Imams read the Quran over his resting place 24/7.

The Sheikh Zayed Grand Mosque is open 7 days a week (Friday’s limited hours due to Congregational Prayer) for non-Muslim visitors. Entry is free as are guided tours (see timetable here), though they have recently added guest registration which can be done online or at the venue, bring photo identification.

Guests are provided with the appropriate attire to attend the mosque. (Since COVID this has not been possible due to health and safety reasons all guests must bring their own abaya or be fully covered in accordance with mosque dress code – these items can be purchased now in a small bazaar attached to the mosque underground entrance).

We have a complete guide to Abu Dhabi day trips and cultural attractions of interest here.

There are, of course, options to hire a car, take a taxi or navigate the Intercity Bus and Abu Dhabi public bus system.  We explain each of these options in much more detail here.

If you are after truly stunning photos of the Sheikh Zayed Grand Mosque, our top tip is to self-drive in order to arrive either before opening time (9:00 am Saturday to Thursday), or come much later in the afternoon when the sun is setting. It can still be crowded at this time but nowhere near as busy as mid-morning when most tour buses from Dubai arrive en masse.

Situated in neighbouring Sharjah, this stunning Ottoman-style mosque completed in 2005 was the first to open its doors to non-Muslim visitors. A guided one hour tour can be arranged by Sharjah Centre for Cultural Communication and include complimentary qahwa (Arabic coffee).

Not only architecturally beautiful, but the mosque also overlooks the Khalid Lagoon which adds to its stunning splendour and is easily accessible from the other cultural highlights in the Heart of Sharjah.

Newly completed in 2019 it is one of the newest and most impressive mosques in the UAE. It is now Sharjah’s largest mosque with grounds covering 185,000 square meters, the Mosque can take 25,000 worshippers.

Whilst the inside is for worshippers only, guests are invited to admire the mosque from the track that runs around the entire mosque complex. Learn more at visitsharjah.com

The largest mosque on the UAE’s eastern coast and second largest in the country, the Sheikh Zayed Mosque covers an area the size of three football pictures. The mosque has six minarets each 100 meters high and the great prayer hall has space for 32,000 worshippers. It is not open to the public.

Dating back to 1446 AD, this is believed to be the oldest mosque in the UAE. The mosque, constructed of mud and stone, is tiny and whilst non-muslims are not allowed to enter, it is possible to catch a peep of the interior through the doors.

The mosque still hosts daily prayers and all visitors to the site even from outside should dress modestly (women should cover their hair as well as their arms and legs). The Mosque can be seen as part of an east-coast UAE day trip.

You can find a complete guide to exploring Fujairah here.

Based in the regional city of Al Ain, Abu Dhabi Emirate, the Sheikh Khalifa Bin Zayed Grand Mosque named after the country’s current ruling President opened to the public on 21 April 2021.

Capable of housing 20,000 worshippers inside and in its external courtyards, it’s one of the country’s largest mosques measuring in at over 250,000m2

COVID restrictions have limited entry since opening, it is unclear as yet whether it will be open to non-worshippers in the future.

Things to keep in mind visiting a Dubai Mosque

It is essential you follow the necessary protocol to enter a mosque even as a non-Muslim:

You can learn more about religious etiquette, local laws and customs in Dubai here.

Best Sunday Brunch in Dubai for 2022

Is Dubai THAT hot? What to expect visiting...

Dubai Taxi Booking: How to Use Public Taxis...

10 Unmissable Dubai Nightclubs to Experience in 2022