Latest news
Ultimate guide to plan your visit to Burj Khalifa
150+ amazing places to visit in Dubai in 2020
Dubai’s 8 Best Breakfast Places You Need to Try in 2020
When will Legoland Dubai Re-open?
How to enjoy the Best of Dubai in August (even when it’s hot!)
Eid Al Adha Public Holiday in Dubai – 2020
Negative Covid-19 test needed for UAE entry from 1 August 2020
What is the Dubai Assured Stamp? Reassurance for Dubai Visitors
30+ incredible places to visit in Dubai for free
Can you visit the Burj Al Arab? Inside Dubai’s most exclusive hotel
Dubai’s best hotels with a water park & slides included
Dubai re-opening Post Covid-19: Things visitors should know 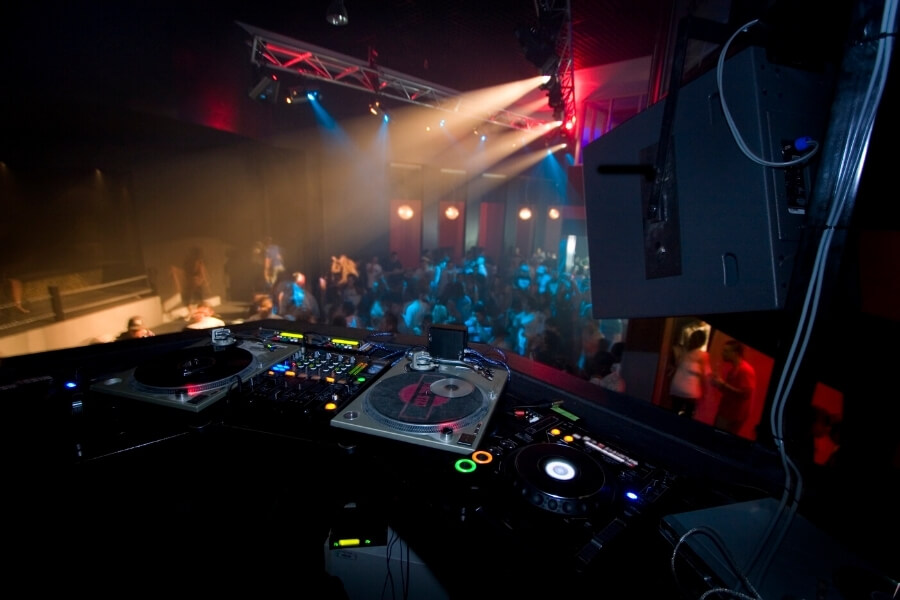 Unmissable Nightclubs to experience in Dubai

Dubai at night is absolutely unlike anything you’ll experience anywhere else.

The city is world-famous for its wild nightlife, and it’s something you definitely have to see for yourself. There are so many choices when it comes to Dubai nightclubs that it can be difficult to know where to start – so we’ve compiled a listing of some of the best nightclubs in Dubai with focuses from DJ’s to live acts and everything in between. Let’s see what Dubai has to offer.

Please note this list was compiled pre-Covid-19. Many of the venues remain temporarily closed due to health and safety measures. Always call in advance to avoid any disappointement.

Zero Gravity is unique because it’s an open-air club that’s right next to the beach. By day, it’s a nice place to relax by the ocean. But once the sun goes down, it transforms into a party zone with a fun, vibrant atmosphere.

This club features delicious cuisine and international DJs playing music every weekend. It’s a great place to visit if you’re looking for a lively nightclub with a spectacular view.

Not only is White Dubai one of the best nightclubs in Dubai, but it’s also frequently considered one of the top 100 nightclubs in the entire world. Located on an open-air rooftop, this club often hosts world-famous musical acts playing music on a state of the art sound system.

Additionally, White Dubai features spectacular light shows and an incredible view of downtown Dubai. It also has two ladies’ nights a week. This award-winning venue is simply a must-see for anyone visiting Dubai.

Base Dubai is a relative newcomer to the Dubai nightlife scene, but it’s already made a huge impression. This is largely thanks to their incredible visual performances. This club has pyrotechnics and light shows that are unlike anything you’ve ever seen.

Base Dubai also has performances from huge music artists on a regular basis. Rick Ross, French Montana, David Guetta, and Afrojack are some of the acts they’ve hosted in the past.

Where to find Base Dubai: Dubai Design District

Drai’s Dubai is widely considered one of the best hip hop clubs in Dubai. It was once a relaxed daytime pool club. Now it’s 100 percent focused on serving the nightlife in Dubai with its incredible hip hop and R&B performances.

Like others on this list, Drai’s Dubai has hosted some big names. These include Wiz Khalifa, Ne-Yo, and Nelly. It also has ladies’ night once a week in which complimentary drinks are served for the girls. Doors open 10:00 PM to 4:00 AM.

Cavalli Club is among the longest-running clubs in Dubai. In fact, the 2019 World’s Best Club Awards rated it as the second-best nightclub in the world. This particular club is famous for its flamboyant interior and delicious Italian cuisine.

Billionaire Mansion is a part of the Billionaire Life brand, which was the brainchild of entrepreneur, Flavio Briatore. Today, it is one of the best clubs in Dubai. The adjacent restaurant is actually just as famous as the nightclub itself. It offers a variety of authentic Italian and Japanese dishes.

Once you’ve had your meal, you can get ready to party. The club is equally well-known for its music and light shows as it is for its meals.

A post shared by Billionaire Mansion Dubai (@billionairemansiondubai) on Feb 21, 2020 at 2:10am PST

Toy Room was once a relatively humble club in Al Murooj Matana. Since moving to Meydan, it’s become one of the top clubs in Dubai. It’s much more intimate than some of the other clubs on this list, and it’s also the only one with its own mascot. You haven’t really partied until you’ve partied with FRANK the Bear.

Toy Room has also hosted some of the biggest names in hip hop. A few of these include Jeremih, Nelly, and Busta Rhymes.

This Dubai dance club can be found on the 32nd floor of the V Hotel. As a result, it offers incredible views of the Arabian Gulf and Dubai Water Canal. This club is known for its ultra-luxurious interior and wide range of music. Depending on when you go, you can hear anything from R&B to urban to pop.

BOA is also unique because it’s open an impressive five nights a week. Furthermore, ladies get free drinks on most nights.

The Secret Room is one of the newer Dubai nightclubs, but it’s already made a name for itself. Its grafitti-covered entrance opens up to a breathtaking, golden interior. Alternatively, you can drive straight into the club if you’re a VIP member.

The Secret Room offers an eclectic range of music. You can hear everything from R&B, hip hop, and Latino. It’s open four nights a week, but make sure you make a reservation ahead of time.

Industrial Avenue is among the most unique Dubai clubs. This underground club exists as an alternative to some of the other best nightclubs in Dubai. Instead of glitz and glamour, Industrial Avenue has a grittier interior and a more laidback atmosphere.

The dress code is casual, and the party is just as lively as any other Dubai nightclub. Grab a few drinks at their hangout bar, also known as the Shoreditch, then go dance to some house or hip hop music.

1OAK stands for one of a kind, and this club certainly lives up to its name. It’s one of the best nightclubs in Dubai for singles and a frequent hangout spot for celebrities. Its interior has a futuristic atmosphere, and it’s the perfect place to go if you want to feel like a rockstar.

Unlike several other clubs on this list, 1OAK’s music focuses more on local DJs than big-name performers. This makes it an excellent place to dance, party, and enjoy Dubai at night.

The nightclubbing scene is constantly evolving in Dubai, so make sure you check back in before your trip to Dubai to see what’s new, what’s closed (we miss you 360 Dubai!) and where the party is at.

You may also like to pop on over and see what’s happening during the day, Dubai’s hottest beach clubs can be found here.

Things visitors should know about the Nightclubbing scene in Dubai

The legal drinking age in Dubai is 21 years of age and Dubai night clubs adhere to this rule very strictly. Don’t even think about driving if you’ve had a drink as there is zero-tolerance for drink driving and you’ll almost guarantee yourself in front of the courts if you are caught by police.

What ID will I need?

For visitors to Dubai, a passport is an acceptable form of ID, while residents will need their Emirates ID or a driving license. Whilst 21 is the legal drinking age, some clubs may limit entry to those 25+.

What is the Dress code at Dubai nigthclubs

Although skimpy party wear, in general, is frowned upon in public places in Dubai, nightclubbing attire is a whole different ball game. Dubai nightclubs are really dress to impress places – for ladies, this means short skirts and microminis wouldn’t be turned away, and gents will want their nicest shirts and trousers.

If you are catching transport on the way to a nightclub, it would be advisable for ladies to cover up. If you are casually dressed in jeans, shorts or flip flops, other than at beach clubs you are likely to be turned away.

You can read more about dress code in Dubai here.

What time do nightclubs open?

This is highly variable. Some will extend the party all the way from Friday brunch closing through to the early hours where as some won’t open until restaurants close. You can bet on most being open until at least 3:00 AM.

13 Dubai souvenirs to make room for in your suitcase

When will Legoland Dubai Re-open?

How to enjoy the Best of Dubai in...

30+ incredible places to visit in Dubai for...

Can you visit the Burj Al Arab? Inside...

Is it OK to visit Dubai in July?

Save on top Dubai attractions