Latest news
Ultimate Visitor Guide to Expo 2020 Dubai
150+ amazing places to visit in Dubai in 2022
Best places to stay in Dubai: 2022 guide to Dubai accommodation for all budgets
80+ exciting Dubai activities for kids in 2022
Classic 7 days in Dubai itinerary for all types of travellers
Where to experience the Camel Races in Dubai – with 2022 Race Calendar
Free airline transit buses Dubai to Abu Dhabi explained
Dubai Public Holidays in 2022
Why we love Dubai in January 2022 – and we bet you will too!
How to cross the Dubai to Abu Dhabi border during coronavirus restrictions – UPDATED December...
Exciting Ways to Bring in the New Year 2022 in Dubai
Photography Laws in the United Arab Emirates: Useful Tips for Tourists
Check out these stunning Family Holiday Apartments in Dubai
An Action-Packed Line Up for Dubai in December 2021 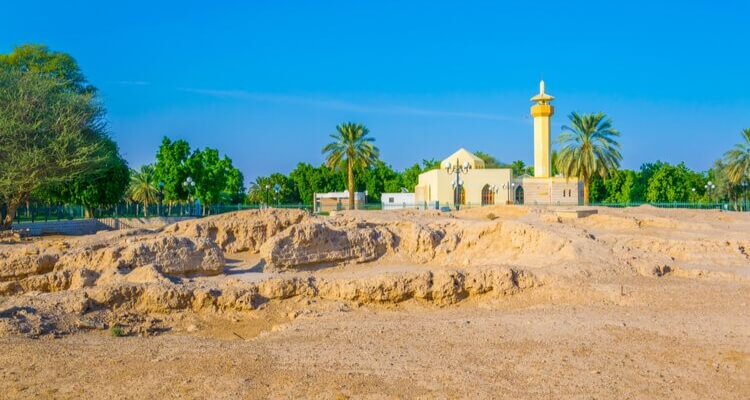 Also known as the Oasis City or the Garden City, Al Ain in the second-largest city in the Emirate of Abu Dhabi and home to a huge amount of the UAE’s culture and history, dating back some 5,000 years to the Neolithic period.

Sitting on the border with Oman, Al Ain is a great day trip location from Dubai and home to the UAE’s only current tangible UNESCO World Heritage Site – well, there are actually several of them – collectively known as the Cultural Sites of Al Ain.

We’re going to talk you through exactly what you can expect to find in Al Ain and how to organise a day trip or overnighter to the Oasis City, Al Ain from Dubai.

Please Note: Since July 2020, there is a border crossing point between Dubai and Abu Dhabi Emiraate. There are several criteria visitors must meet to cross the border into Abu Dhabi emirate – learn more here.

So why is Al Ain worth a visit?

Far more than just the UNESCO cultural sites, Al Ain has been at the crossroads of Arabian civilisation for centuries. The Bedouin would retreat from the coast to the desert during the hottest times of the year, with the natural oasis bringing a cooling reprieve.

Al Ain houses many museums which seek to document the country’s past and are well worthy of being included on an Al Ain road trip, sites to consider include:

If you are interested to learn more about the Al Ain Zoo, amusement parks and family activities on offer in Al Ain, check out this detailed family guide to Al Ain.

Although consisting of only one listing, The Al Ain sites are, in fact, made up of several sites; Hafit, Hili, Bidaa Bimt Saud and Oases Areas.

These sites testify to human occupation of the desert region since the neolithic period with vestiges of many prehistoric cultures – notable the Bronze Age and The Iron Age. Remarkable vestiges include:

You can read more about the UNESCO World Heritage Inscription here.

Let’s look at each of the sites in more detail:

The Oasis of Al Ain

There are several Oasis in Al Ain that make up the UNESCO World Heritage Site, namely:

The largest is Al Ain Oasis which can be found in the very centre of the city of Al Ain. Extensive restoration works took place on the site over the last decade which reopened to the public in 2016 and is now the city’s most popular attraction.

A tranquil forest of trees and alleyed laneways, it was nearly lost beneath the city as rapid development occurred in the 1980s and 1990s. The 3,000-acre site (1,200 hectares) contains more than 147,000 palm trees. You will also find within the grounds an old fortification and mosque.

The falaj system is what most visitors are intrigued by; an ancient irrigation system bringing bore water to farms. A small Eco-Centre has been built within the Al Ain Oasis to provide more information on the history and importance of the falaj.

Just outside of the oasis is the Al Ain Oasis Plaza which is open until 9pm at night for refreshments.

The Oasis is open 8am to 5pm daily and free to enter.

Found at the foot of Abu Dhabi’s highest peak Jebel Hafeet, the circular Bee Hive Tombs are thought to date back up to 5,000 years. The artefacts found within the tombs has helped archaeologists to substantiate claims of trade routes dating to around 3,200 to 2,700 BCE.

Since February 2020, the tombs now fall within the Jebel Hafit Desert Park. Hiking and biking are available, along with camel rides, dune buggy experiences and even overnight camping in Bedouin-style tents and eco glamping options.

Open 8am to 6pm or sunset, entry 5AED activities extra.

Home to the largest discovered Bronze Age settlement in the UAE, the park is a living museum of tombs, settlements and a falaj – mostly it is only foundations that can be spotted today. Most items of significance having been moved to the central Al Ain National Museum (which is closed for an unspecified period of time for renovations) in the centre of Al Ain, adjacent to the Al Ain Oasis.

The park is open limited hours 4pm to 11pm daily, entry is free.

There are several small finds near one another contributing to this archaeological site, sitting about 15kms to the north of Al Ain:

This site is quite isolated and not easily accessible to the public. Finds from the site are also housed in the Al Ain National Museum. You can learn more about this site on abudhabiculture.ae

How to get to Al Ain From Dubai

You have a few choices in driving to Al Ain – self-drive or with a tour/driver or taking the public bus.

Although you are crossing from Dubai Emirate into Abu Dhabi Emirate, there is no formal border crossing involved, just large expanses of highway through the desert.

NB This changed in July 2020 due to COVID-19 control measures. Please read these border crossing rules before attempting a day trip to Al Ain from Dubai.

The bus from Dubai – Route E201 – departs from Al Ghubaiba bus station every 30 minutes and costs 25AED one way. The bus passes through:

And terminates at Al Ain Central Bus Station, which is adjacent to the Al Ain Oasis. To see more of the outlying UNESCO World Heritage sites, you would need a taxi or private car.

The journey takes a bit over 2 hours in each direction.

Private cars can be hired from numerous pickup locations in Dubai. To find the cheapest prices on rental cars, we recommend you try Skyscanner car hire search as your starting point:

With fast freeways, the drive from Dubai to Al Ain should only take you a bit over an hour. With a small group and confident driver, this is definitely the preferred option for an Al Ain day trip.

There are surprisingly few tour operators taking guests from Dubai to Al Ain’s UNESCO World Heritage Sites daily. You will find tours normally incorporate not only the UNESCO sites but al Jahili Fort and numerous museums.

Al Ain has a reasonable range of accommodation options if you are looking to extend your trip to Al Ain. You will certainly need more than two days to capture all the highlights of the Oasis City.

Most resorts and hotels are a little dated but you can find a bargain resort retreat, our favourites are:

You can find a full selection of hotel & Airbnb options for Al Ain here:

When is it best to visit Al Ain

Like much of the country, the cooler winter months are ideal for exploring Al Ain from November through to April. The summer months it is still possible, and the oases do bring a refreshing reprieve from the summer heat but be prepared it can still be a very sweaty experience in the summer.

In the winter, Al Ain can experience quite heavy fog which plays havoc on the highways to Al Ain from Dubai and Abu Dhabi. It normally burns off before lunchtime and you are left with glorious sunny winter afternoons and perfect sunsets from Jebel Hafeet.

Seeking out the very best of Dubai in February 2022

Where to experience the Camel Races in Dubai...

23 beautiful Parks and Gardens in Dubai you...

Is Dubai Pass worth it? The best way...

Journey around the world at Global Village Dubai...